* Some rental car suppliers may charge a credit card fee for amounts payable on arrival. 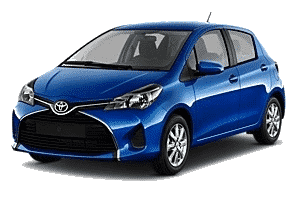 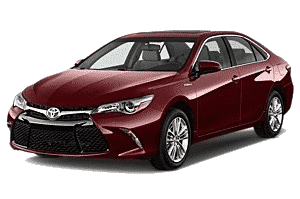 Excellent customer service. Thank you for your help.

Simple and quick. Lowest price I could find.

Taking a taxi from Canberra Airport into downtown Canberra may only take about 15 minutes but will cost you as much as $50. And that’s just one-way. If you’re travelling further, then the cost will be even higher. So why not book a rental vehicle instead? Hiring a car at Canberra Airport gives you the flexibility and freedom to travel at your own pace and can save you money.

There are over 11 rental car brands at Canberra Airport competing for your business. If you want to find the best car hire deal that’s a lot of websites to check out...

To make things easy, our car rental comparison search engine hunts down the very best offers available from all car rental suppliers and lists them side-by-side for you. This lets you instantly compare and find the best deals.

All car hire companies at Canberra Airport (including Avis, Budget, Europcar, Hertz and Thrifty) have desks located on the ground floor, just outside the arrivals hall of the terminal, adjacent to the baggage collection belts. Their vehicles are conveniently parked close to the front entrance, next to the drop off zone.

Before you go to pick up your car at Canberra Airport, make sure you have your confirmation eVoucher, a full and valid driver’s licence for each of the drivers, a credit card or cash for the deposit and suitable ID.

"On-airport" means these rental companies have check-in desks within the Canberra Airport terminal.

The big advantage of this for you is convenience and speed. Once you've checked in you can jump in your car and get going. No waiting around at Canberra Airport for transfer vans.

But it does come at a cost. The fees are higher than they might be for an off-airport rental company to offset the costs of being at Canberra Airport.

Car rental desks are located on the ground floor of the airport, just outside the arrivals hall of the terminal, and adjacent to the baggage collection belts.

Use our price comparison search tool to find the best car hire deals from these on-airport car hire brands at Canberra Airport:

Save on Car Rental

Ways to save money on Canberra Airport car hire

Don’t hire a bigger vehicle than you require and consider if you really need all the extras you’ll be offered, such as a GPS. Google Maps on your phone will normally do the trick, provided phone data charges aren’t an issue.

With lengthy distances and long travel times between major cities, petrol stops are likely to be frequent. Fuel prices can vary widely from place to the next, so if you want to spend less at the pump use a mobile app like MotorMouth to find the best prices.

With less traffic to contend with than you’ll find at busier airports in more populated cities like Sydney and Melbourne, you can relax behind the wheel of your hire car when driving in Canberra. But you will need to be comfortable negotiating roundabouts — you’ll come across plenty of them at Canberra’s intersections.

If you’re not used to roundabouts (we’re talking to you, Americans and Canadians) the trick is to position your car in the right lane for the exit you’re going to take, and to give way to all traffic on your right that will cross your path before entering the roundabout. You should also signal a left turn before taking the exit you want to take.

Unless otherwise signposted, the speed limit in urban and suburban areas is 50km/h — 100km/h when you are driving on a highway. When driving, all occupants must wear seatbelts or an approved child restraint (a child safety seat or booster seat depending on the child’s size).

You’ll find plenty of parking in Canberra, with both short-term and long-term parking spaces on offer. And unlike many other cities, there are no toll roads. However, if you are travelling interstate you should check with your rental car provider to make sure your car has an e-Tag for automatic toll payment.

Return with a full tank

Returning your rental car with a full tank of petrol will mean you avoid paying the high price rental car companies charge to top up fuel tanks. There are petrol stations close to Canberra Airport, including Ampol Foodary which is situated at 1/3 Rogan Street, just 500 metres from the airport. Click here to find petrol stations close to Canberra Airport.

Glad we found your site. Booking was simple and quick and prices good.

Great price and easy to book. Thanks.

Easy to use and make a booking. Will be back again.

A rental car gives you the freedom and flexibility to make the most of your time exploring the Canberra and surrounding areas of the ACT, including the stunning views from atop Mount Ainslee. Take in the hustle and bustle of the city centre and the rich political history of Canberra's parliament buildings.  Below are some of our favourite attractions that we know you will love.  For more ideas, check out the Visit Canberra website

Canberra, from the Mt Ainslie lookout

Canberra is famous for its stunning city planning design by landscape architect Walter Burley Griffin. The architect won an international design competition in 1912, which gave him the opportunity to decide how the city would look.

The blueprint by the Chicago-based architects Walter Burley Griffin and his wife Marion Mahony Griffin included a street plan of circles, hexagons and triangles, all centred on topographical landmarks of the region.

Griffin described the view from Mt Ainslie as “an irregular amphitheatre” with Mount Ainslie forming one of the top galleries. The slopes to the water formed the auditorium, and the Molonglo and flood basin formed the arena.

The view from Mt Ainslie gives you a bird’s-eye view of Griffin’s magnificent plan including the triangle which forms the three points of Parliament House, Civic and the Australian/American Memorial.

At the base of the mountain, make sure you visit Remembrance Nature Park, which marks the 60th anniversary of the Armistice that ended in the First World War. From there you will find several walking tracks including the Mt Ainslie walking trail, the Remembrance Natural trail and the Kokoda Track.

In order to get to Mount Ainslie, drive from the Canberra and Region Visitors Centre, down Northbourne Avenue and take the first turn left. Turn right onto Limestone Avenue, follow the road past the Australian War Memorial and turn left onto Mt Ainslie Drive. You can drive, cycle or walk up to the lookout, but make sure you bring some comfortable clothing and walking shoes as well as a camera. The views are breathtaking! 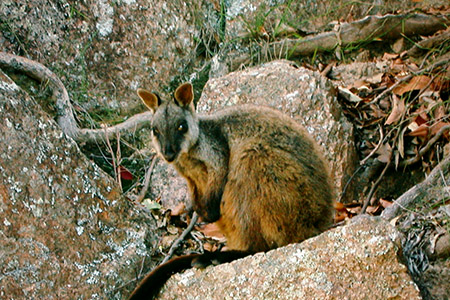 Fast-forward over 20,000 years from when the first sign of human-inhabitants was found, and you have a beautiful nature reserve. There are a wide variety of walks throughout native flora and fauna in what is a natural habitat for Australian wildlife such as kangaroos, platypus, koalas, emus, and wallabies.

The bushwalks range from half an hour to over six hours and cover bushland and rambling hills and walkways. Sights that are definitely worth seeing include the Birringai Rock Shelter which is the oldest known Aboriginal site in the Australian Capital Territory. Bogong Rocks includes a moth resting site, while Tidbinbilla Mountain is a great place to view the surrounding area from.

The Sanctuary is home to the eucalypt forest where a variety of koala live and to a wetland environment which includes a conservation breeding programme for critically endangered animals such as the Southern Brush-tailed Rock-wallaby and the Tasmanian Bettong.

While you are at the park, you might also enjoy the mountain bike trails as well as overnight accommodation available in the area.

Tidbinbilla is 40 minutes drive from Canberra’s city centre, along a picturesque route via Cotter Road.

If you choose to take part in one of the bush walks, make sure you wear suitable clothing and let someone know where you are travelling to. Bring wet-weather gear with you and do not leave any valuables in plain view in your vehicle. 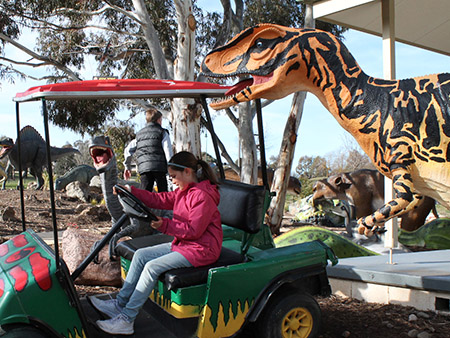 If you have a little someone who LOVES dinosaurs, or you have a soft spot for the Triassic period yourself, don’t miss the National Dinosaur Museum.

Just a 23-minute drive from Canberra Airport, the museum is located in Gold Creek Village. It holds the largest permanent display of dinosaur and fossil material in the country and offers a wide variety of activities for the family.

Beginning as a small collection in 1993, the National Dinosaur Museum has quickly grown to include 23 complete skeletons and over 300 displays of fossils. The museum is run by a group of dedicated scientists and geologists and includes 12 dinosaur animatronics.

Tickets are available at $12 for children and $20 for adults. Children under the age of four are free of charge and families can visit for $55. 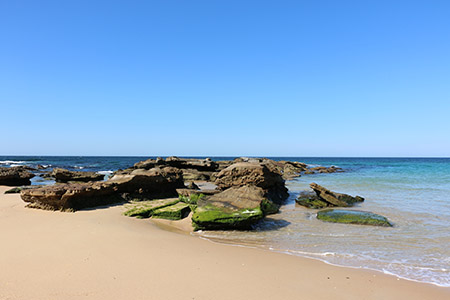 Just over a two-hour drive from Canberra, Batemans Bay is a sleepy seaside town with unspoilt views of golden sands, oyster flats and sheltered coves from the great Tasman Sea.

Home to an eclectic variety of fishermen, artists, surfers and families on holiday, Batemans Bay is a friendly, laid-back town with a lot to offer.

If you are up for a good walk, take a trip through Clyde River National Park and enjoy kayaking and snorkelling as well as a good spot of relaxation at the beach campground. The Clyde River is known for top fishing sports and you will find a variety of fish including flathead or mulloway.

Home to the Easter Grey Kangaroo, Murramarang National Park will impress you with its wide variety of Australian wildlife roaming free throughout the trees and water-ways. Birdland Animal Park includes a diverse array of native birds and Catalina Country Club boasts a 27-hole golf course.

With a variety of accommodation options available throughout the area, why not take a couple of days break at the Bay? Just make sure you book in advance as the region can get very popular over the summer months.

Last Updated on September 7, 2022
SAVE ON CAR RENTAL